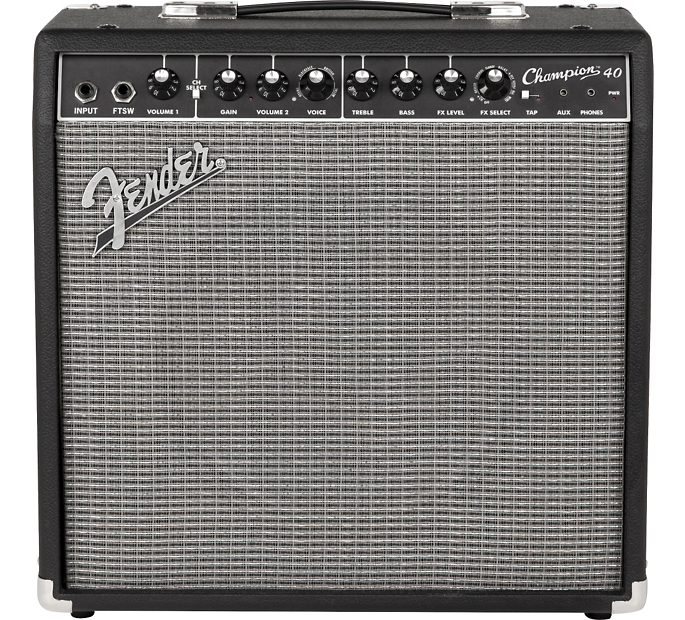 When searching for affordable quality gear to recommend to students, every now and then I come across a game changer; something that stops me in my tracks and forces me to rethink my previous assumptions. The Fender Champion 20 and 40 modeling amps presented one of those moments. Jack of all trades – Fender Champion 40

What is Amp Modeling?

Put simply, amp modeling is the ability of one guitar amplifier to mimic the sound of another. This digital-based technology first came into prominence in the late 90’s with the Line 6 Pod and has evolved through the years to the point that nearly all major amp manufacturers have at least one modeling amp in their lineup.

Like all digital technology, amp modeling has made steady improvement since it’s inception. The early models tended to be very “tech” oriented, requiring the user to scroll through presets, tweak settings and then save those settings for later use. This approach gives maximum flexibility in customization but can be tedious and unintuitive for the user. The amp models could be accurate in capturing the signature of the original amp but fell short in feel for the player; nuance in picking attack and dynamics could be lost between the guitar and the amp, leaving the player underwhelmed. This has been my experience in the past when playing through modeling amps and processors: “Yeah, that mostly sounds kinda like a Marshall, but…meh”. Usually the result is 10 minutes of noodling and then never coming back.

The other criticism I’ve had of modeling amps is the amount of effects they load into the presets. Amp makers seem gung ho on cramming nearly every feature into every preset. Sure, you can remove all the junk and re-save all the presets, but now we’re back to tedious and unintuitive.

I wanted to purchase a good quality and affordable amp for students to use at lessons; one that also had some straight-forward effects like reverb, delay, chorus, etc. for demonstration. After doing some research, the Fender Champion 40 seemed to fit the bill so I decided to give it a try. I wasn’t prepared to like this amp as much as I did.

The layout is much like a standard non-modeling amp. In fact, the words “model” or “modeling” are noticeably absent. Common controls include volume and gain knobs, two tone controls (bass and treble), and two effects controls (one to select the effect, the other for level). In addition, the tap button is for fine tuning delay spacing and modulation (chorus, flanger, tremolo, vibrato) frequency but you can ignore that button if those settings are beyond your interest or current level of knowledge.

First off, kudos to Fender for including an intuitive effects control. The ease of traversing different effects and adjusting their levels is easy and, well, fun. But the magic knob on this amp is the voice control. This is essentially the selector for the different amp models. These range from classic Fender “tweed” and “blackface” amps to Marshall (“British”) voices and a couple higher gain metal amps. The simplest way to put it is that these voices sound great and feel natural. I found myself getting lost in a couple of the presets and marveling at reproducing what I remember from my favorite amps of years past–all from one very modest sized and fairly inexpensive combo amp!

I also love that this amp doesn’t have a digital vibe when tweaking the settings. Without getting into technical criticisms of typical modeling amps–I’m looking at you Fender Mustang!–it just seems like you’re tweaking a regular old guitar amp. There’s no getting lost in preset minutia or having to constantly tweak and save settings. I find the digital features to be seamlessly incorporated into a traditional guitar amp format–a perfect balance. For Star Wars nerds, think Episode 7 (yea) vs. the Prequel (yuck).

I could gush on but will only say that I liked this amp so much that I picked up it’s little brother, the Champion 20 for me to play through at lessons. This version has the same voices and layout as the Champion 40 only in a single channel format with smaller wattage/speaker and no footswitch option.

The “I Don’t Care” Factor

There comes a point in digital audio technology where it comes so close to matching its analog counterpart, that any minute differences or shortcomings become insignificant to the user. I call this the “I don’t care” factor and it happens at different points with different people over different gear–for some it never happens.

I can’t say that the #2 tweed setting on this amp sounds quite as good as my long departed Fender Pro Reverb tube combo. There are still some detectable sonic limitations with solid state amp modelers that make them fall short of the classic tube amps they’re modeling. However, I can say that I’m starting to care less and less.