The Language of the Guitar 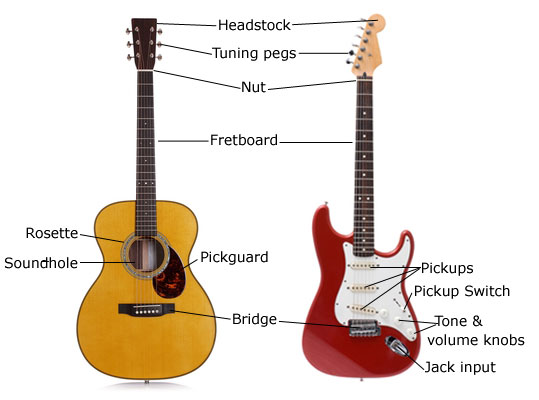 If you’re new to the world of guitar, you may hear some terms and phrases bandied about that sound like people talking in a foreign language.  In many cases, these are simply ways to describe how the mechanical parts of the instrument are calibrated for the individual player.  Once you become familiar with a few of these concepts, you’ll be able to start conversing in the language of guitar.

String Guage is how thick or thin the strings are.  This is measured in millimeters and is solely a matter of preference to the player.  Gauges are often referred to as heavy (thickest), medium and light (thinnest).

Fret buzz is a rattling, buzzing sound that happens when a vibrating string hits against one or more frets.  A certain amount of fret buzz is normal.  When it becomes excessive, irritating or prevents notes from playing clearly, it’s time for some adjustment.

Setup is the overall process of adjusting a guitar for an individual player.  You can take a guitar for a general setup or provide specific requirements for your taste or needs.  Maybe you like really low action and light gauge strings or higher action and heavy gauge strings (sicko!).  Or maybe you’re getting some fret buzz on the D string at the 4th fret that you want to get rid of.  Let your guitar tech know your concerns and they’ll address them during the setup process.

If you’ve made it this far, hopefully some of those elusive conversations and blog posts will start to make a little more sense.  You’ll be well on your way to speaking the language of the guitar!