It’s All About the Pickups…

When it comes to the sound of a guitar, the main factor is the pickups.   Sure, there are plenty of other factors, but when it comes to sound, it all comes down to the pickup type. Put simply, there are two types of pickups: single coil and double coil (aka humbucker).

The Stratocaster and the Les Paul

On opposite ends of the sound spectrum are the Gibson Les Paul and the Fender Stratocaster (aka “Strat“).  The stock Les Paul has 2 humbucker pickups and the stock Stratocaster has 3 single coil pickups.  The sound and style of these guitars has become so common they are now types as much as they are specific models.  Nearly every guitar manufacturer has a “les paul” type or a “strat” type model. 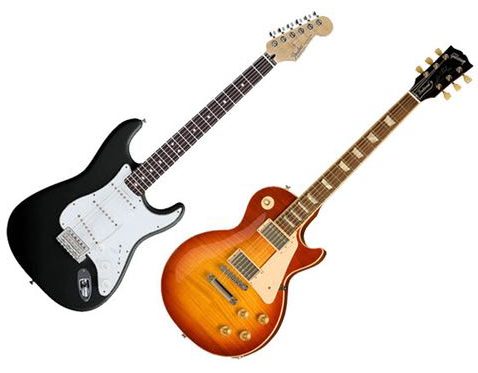 These two guitars will take you just about anywhere you want to go sound-wise. Their sound can adequately cover over 90% of electric guitar sounds you hear on records.  That’s not to say that all those recordings were made using a Les Paul or Strat, but if you’re looking to start your collection or just ready to get a versatile guitar, you can get pretty close to most electric guitar sounds with both of these guitar types at your disposal.

So, What’s it Going to Cost?

Here’s the good news.  Because so many guitar manufacturers have Strat and Les Paul models, you can get a quality version for $350 or less.  Even better, both Gibson and Fender have a 2nd tier line of these famous models, complete with the signature.  So you can get yourself a great guitar in an Epiphone Les Paul or a Squier Stratocaster while also giving your wallet a break.  Now, here’s where you’ll want to pay attention to specific models as there is a noticeable bump in quality from the beginner-only models to the ones in the 2nd and 3rd price brackets.  Below are the Epiphone and Squier models I recommend as your first electric guitar in order of lowest to highest price:

And the Winner is…

The Squier Vintage Modified Stratocaster slightly edges out the Epiphone Les Paul Standard for value because it simply costs less than the comparable Epiphone model.  It also maintains the versatility in sound of a classic Stratocaster with the 3 single coil pickups and 5 position selector switch.  That said, either model would be a great first guitar and may even be an instrument you want to keep well beyond those beginner years.