12 Bar Blues Holds the Key to the Universe 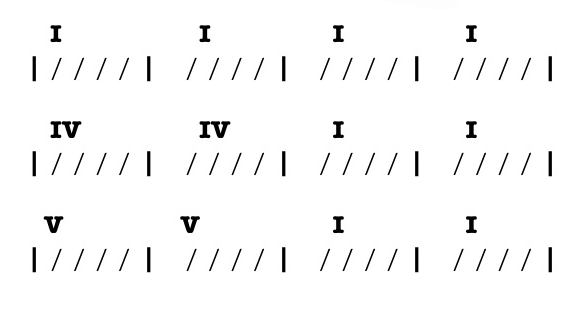 …well, at least to the musical universe.  Learning this basic 12 measure pattern can help you in numerous ways along your guitar journey.  If you’re a fan of any popular music made in the last forty years, chances are you’ve enjoyed some form of a 12 bar blues progression.  Below are some ways 12 bar blues can help out with guitar learning, and with music education in general.

Blues is practically the only form of music where you can solo using BOTH major and minor scales over the same chord progression (e.g. A minor and A Major).  Try doing that with classical or jazz and see how it sounds!  You can start out using a very basic pentatonic (5 note) minor scale and expand that to a slightly more complex blues scale and eventually incorporate elements of full major/minor scales and beyond.  Blues gives you tremendous flexibility in mixing different scale patterns for experimentation.

The chords used in a standard blues progression are the three major chords in a major key, I-IV-V.   These chords can be played up and down the neck using barre chords or a simple power chord based riff.  Once you learn a single I-IV-V pattern, you can play the pattern starting at any fret on the neck.  Using this method of playing I-IV-V blues, you can now play all major chords in all major keys.  And you don’t even need to know the names of all the chords you’re playing–all you need is the starting chord, which will be the key of progression.

While only a certain number of guitarists call themselves “blues” players, nearly all are familiar with the basic blues pattern.  The first time you get together with other players, try starting with a simple 12 bar blues progression.  It’s a great way to break the ice and get comfortable playing together.  It’s also very easy to come up with multiple guitar parts (riff, rhythm and lead) so everyone can jump right in and play something that sounds good right from the start.

Even if the blues is not your thing, it’s a great tool to have for learning, as well as interacting with other musicians.  Like blues great Albert Collins once said, “Nobody gets out of this place without singin’ the blues”.